The teachers, who were selected from among those recommended by metropolitan and provincial offices of education nationwide, went on an eight-day, seven-night tour in three groups. After first visiting the Changwon industrial site in South Gyeongsang Province, Korea, the delegates are scheduled to visit other industrial sites and facilities in Japan, including Yaskawa Electric Corporation, Nissan Motor Corporation’s manufacturing plant, the Shabondama Factory, the Toyota Commemorative Museum of Industry and Technology, and the Brother Museum.

“It is our pleasure to contribute to building a solid foundation on which our future talents can be nurtured as leaders of Korea by hosting a tour to major industrial sites in Japan, an economic powerhouse,” said Chairman Park.

Since his inauguration as the head of the foundation in 2005, Chairman Park has accompanied teachers on the overseas economic study tour every year.

A total of 2,703 teachers have benefited from Doosan Yonkang Foundation’s Overseas Economic Study Tours since 1989. 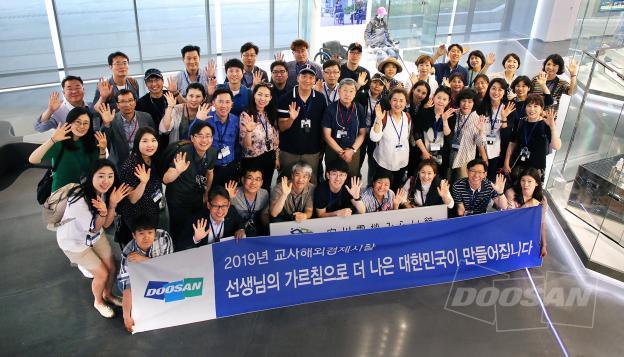 Doosan Yonkang Foundation’s Overseas Economic Study Tour delegates pose for a photo together on June 5 after touring the industrial robotics manufacturing base of the Yaskawa Electric Corporation in Kitakyushu, Japan.

Doosan Serves as Official Patron of The Open 2019